Ryuuichi and Kotaro Kashima arrive at Morinomiya Academy, where they are taken in by the chairwoman, Morinomiya Youko. The two acquaint themselves with the children at the daycare center.

Ryuuichi looks at a map of the Morinomiya Academy buildings while holding Kotaro's hand. They slowly walk towards the chairwoman's office as Ryuu observes that the school is huge. He picks up his little brother and assures him that the chairwoman must be really nice, as she has agreed to take in two strangers like the two of them. As the two walk towards the building, Ryuu sadly recalls that their parents were "free spirits" and hardly came home. One day, they got into a plane crash, so now they will never come home. He remembers that before they could process what just happened, a man named Saikawa met with them on his employer's behalf. His employer, the chairwoman of Morinomiya Academy, had lost her son and daughter-in-law in the same plane crash and is offering to become Ryuu and Kotaro's legal guardian.

When he enters the office, the chairwoman glares at them, saying that she has been impatiently waiting for them for ages. The chairwoman takes Ryuu by surprise, and Kotaro points to her hair and calls it fluffy. Ryuu introduces himself as Kashima Ryuuichi and his brother as Kotaro. After confirming that Ryuu can take care of infants and toddlers, the chairwoman instructs Saikawa to lead them to the daycare center. She points at Ryuu and tells him that in exchange for looking after his needs, he will spend all of his time outside of school as the school's babysitter.

Saikawa closes the door behind him, Ryuu, and Kotaro. Ryuu solemnly looks at the door, wondering if the chairwoman does not want them here. Saikawa addresses the two as "Ryuuichi-sama" and "Kotaro-sama" and kneels down, offering a piggy-back ride as a joke, which surprises Ryuu. On their way to the daycare center, Ryuu asks if the chairwoman has grandchildren of her own, which Saikawa declines. The chairwoman looks at a picture of her son and daughter-in-law as Saikawa explains that she no longer has any family. He shows Ryuu the daycare and explains that the facility was created to assist the female teachers here, but there has been insufficient funding. Ryuu resolves to do what he can and asks Saikawa to tell the chairwoman that he is grateful for the invitation. Saikawa removes his glasses and wipes his eyes, stating that his nobility has moved him to tears. Saikawa wishes him luck before excusing himself.

Ryuu opens the door, and the children immediately stop moving. They stare at Ryuu as he says that he and Kotaro would like to be their friends. When Ryuu asks where their caregiver is, they immediately run over to a sleeping man. One of the toddlers yanks on the man's ear, causing him to wake up and protest from the pain. Ryuu immediately apologizes for waking him up and begins to introduce himself as the new babysitter. The man replies that he has heard of the two. He holds the baby in his lap as he incorrectly calls them "Ryunosuke" and "Torakichi," and Ryuu quickly corrects him. He stands up and holds out his hand, introducing himself as Usaida Yoshihito, a graduate of this school and the only staff member. The children hold onto Usaida's legs as they ask if they can play with them. Usaida instructs them to say their names, and they immediately and excitedly shout their names. Kotaro sits down near the bookshelves and pulls out a book about Panda-chan. He solemnly looks over at his brother as Usaida kneels down beside him. He asks if he wants his big brother back, but Kotaro shakes his head. Usaida then asks if he wants him to read the book to him, but Kotaro also shakes his head. He looks over at Ryuu and the children and pats Kotaro's head, telling him that in this room, he will not notice unless he calls for him. Usaida calls Ryuu over and informs him that his shift is over. He notes that the chairwoman is rather stingy and is unwilling to pay him overtime. He hands Midori, the baby, over to Ryuu and tells him that the mothers should be arriving soon. As Usaida leaves, he tells himself that he would have stayed if he asked. He walks away as he comments that the two brothers are rather similar.

The children's mothers arrive to pick the children up, and Ryuu sighs as he leans against the wall next to the door. Ryuu sighs as he leans against the wall next to the door. He sees that the teachers work rather late into the day, and tiredly wonders when Taka's mother will show up. Before he can finish his thought, a boy, who is much taller than Ryuu and has an intimidating glare, slams the door open and yells to Taka that it is time to go. Ryuu, surprised, looks at him, and he stares back, asking who he is. Ryuu introduces himself again and includes that he is in his third year of junior high. The boy introduces himself as Kamitani Hayato, also in his third year of junior high. He makes a proper introduction greeting, and Ryuu thinks to himself that he might look scary, but he is actually quite nice. Taka starts to shout, saying that he will play with Ryuu, so Hayato hits him on the head. Taka starts crying, and Ryuu, surprised, nervously tells Hayato that he does not have to hit Taka. Hayato suggests that Ryuu look after his own brother, as he looks lonely all by himself. Ryuu sits down next to Kotaro and apologizes for not spending much time with him. He asks if he would like him to read the book to him, but Kotaro falls onto Ryuu's lap. Ryuu sprints out to Hayato, who is walking with Taka, begging him to show him where the closest hospital is, as his brother has a fever. Hayato agrees, and the two take Hayato's bike while Ryuu reflects on his negligence towards Kotaro's wellbeing. He asks himself why he left him alone when he knows that Kotaro does not tend to admit that something is wrong.

The doctor tells Ryuu that he has a fever probably from stress from a new environment and that he will get better after a bit of rest. Ryuu steps out and sits on the hospital steps. He opens his phone to call his parents, but when he dials his father's number, he remembers that his parents will not come back. Ryuu reminds himself that no matter what he calls them for, they will never come as he cries. He also realizes that he is the only one who can protect Kotaro, his only family. Just then, the chairwoman places her hand on Ryuu's head, noting that he is finally crying. She recalls that during the funeral for the plane crash victims, she saw that the only ones who were not crying were her, Ryuu, and Kotaro. She tells Ryuu that those who they have lost will not come back, but that does not mean that they are alone in this world. Ryuu then realizes that somewhere inside of him, he felt that his parents would come back, just like they always had. Ryuu steps into the hospital to hear crying. The nurse brings out a crying Kotaro, informing Ryuu that he has been crying ever since he woke up. Kotaro turns towards his brother and reaches his arms out, calling for him. Ryuu hugs Kotaro as he calls him an idiot for not calling him over sooner. Ryuu also starts crying as he wonders whether Kotaro has realized that he will not see his parents again. He reflects upon whether or not the two should have started crying sooner. That night, the chairwoman comes into Ryuu and Kotaro's room to properly tuck in their blanket. When she leaves, Ryuu tears up, noting that the blanket is warm. Ryuu sees that the chairwoman is right, that no one is truly alone.

The chairwoman calls for Saikawa and demands where the shabby flowers on her desk came from. She grumbles that if visitors saw these flowers, they would think she is running a backwater school. Saikawa apologizes and explains that these are flowers that Ryuu and Kotaro picked for her. She gasps, and Saikawa prepares to dispose of the flowers. Before Saikawa can pick up the vase, the chairwoman takes them back. Saikawa asks the chairwoman if she likes them after all, but the chairwoman blushes as she claims that she changed her mind. At the daycare center, Taka asks Kotaro if he would like to read his favorite book with him. Kotaro nods, and the other children smile in excitement. Ryuu reads the book about heroes to the children as Usaida falls asleep holding Midori.

Characters in Order of Appearance 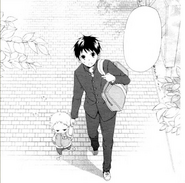 Ryuuichi and Kotarou meet the Chairwoman

Kashima brother's first meeting with the kids from the daycare.

Ryuuichi's first encounter with Hayato
Add a photo to this gallery

Retrieved from "https://gakuenbabysitters.fandom.com/wiki/Chapter_1?oldid=10300"
Community content is available under CC-BY-SA unless otherwise noted.