Yūichirō Umehara (Japanese)
Hayato Kamitani, normally referred to by his surname, Kamitani, is a student at Morinomiya Academy and son of the middle school science teacher, Shizuka. He is the second member of the babysitting club and a member of the baseball club. He is in the same class as Ryuuichi.

Hayato is tall and considered handsome by the girls in his class. He has short black hair and narrow eyes with light green irises, features he inherited from his mother, Shizuka. He is impassive and normally has a deadpan expression, conveying a stern and fierce expression only when he has strong feelings, especially when angry at his younger brother Taka.

He is quiet and rarely shows any other emotion besides annoyance or boredom. He tends not to speak unless its necessary, a trait which he shares with his father, Taizou. It has been noted on numerous occasions that Hayato's bad habit of hitting people on the head comes from Shizuka. He is not prone to angry outbursts but uses baseball batting as an outlet to vent his emotions. Hebihara notes that Hayato rarely cried as a child in contrast to Taka, who cries often when upset.

He cares for his family and friends deeply, threatening to send Inui "flying to the sky" if he hurts "Ryuuko-san" (Ryuuichi in disguise as a girl) and also searches for Taka who runs away after his mother refuses to buy him a carp jet. He loves baseball—his biggest wish is to play at Koshien Stadium—and he is good enough to be considered the club's ace (though he himself describes the club as being "weak" repeatedly[1]).

Hayato is the firstborn son of middle school science teacher Shizuka Kamitani and high school chemistry teacher Taizo Hebihara. As a child, Hayato had a somewhat abnormal relationship with his father Taizou as he was a very strict parent who profusely checked his son's teeth for cavities, never spoiled him and demanded Hayato to never address him as "father" in school. Before his younger brother was born, his parents divorced and his father, Taizou, moved out of the household causing Hayato to harbor a hatred for his father for not raising Taka and for not introducing himself as his biological father. However, Hayato displays his father's discipline and advice at times to control Taka's instances of misbehaving.

He often resorts to violence such as hitting his younger brother on the head in order to resolve the instances when he misbehaves or is simply annoying. Sometimes this is extended to the other children (even Kirin to the disbelief of Ryuuichi) and his acquaintances. This personality trait is seemingly inherited from his mother, despite the fact that she ironically scolds him for resorting towards violence.

He shows a considerate and helpful side when it comes to Ryuuichi and Kotarou, especially when they face an occasional problem and tends to act protectively over the two of them. He is popular with the girls at school who are attracted to his cold personality. In the manga, he receives plenty of love letters and confessions on Valentine's day, though he rejects them all since he sees them as a nuisance.

Hayato and Taka's relationship is a turbulent one, a complete opposite to that of the Kashima brothers. Hayato considers Taka to be loud, brattish, and obnoxious, often annoying him beyond his limitations. He will often hit Taka on the head, or at least threaten to do so, in an attempt to shut him up. This sometimes works, but it never lasts.

Taka often calls Hayato names when he's angry with him, but will voice his admiration for his elder brother just as often (sometimes during the course of a single conversation). It is because of this that one of Taka's greatest frustrations is Hayato's unwillingness to outright say he loves him. Despite not admitting it, he loves his younger brother dearly but is distant in showing it. These affectionate feelings for Taka are shown on rare occasions when he is patient with him.

Hayato does not address his mother with any form of respect, usually referring to her as "old hag." While she does not seem bothered by any disrespect directed towards her (or even Taka, for the most part), Shizuka does not tolerate it when her son is rude or thoughtless towards others. In such cases, she will hit him on the head, which makes it clear to others on where he picked up the habit.[2]

Such violence does not deter Hayato from being blunt with others, and Shizuka knows this. So whenever she desires him to be on his best behavior, or not fall behind on his schoolwork, she resorts to threatening to destroy his cherished possessions, such as his baseball DVD. This sufficiently scares Hayato into doing what she says with no further argument.

Hayato had plenty of time during his childhood to spend with his father before their family ultimately split apart. Though Hayato's penchant for hitting those who annoyed him was no doubt inherited from his mother, the rest of his straightforward attitude is attributed to his father. Hebihara's strict instruction to Hayato on being a responsible man continues even to the present day. And for all his disdain towards bossy authoritative figures, Hayato takes his father's lessons seriously. This is evident with his relationship to Taka, where his manner of passing on life lessons mirrors Hebihara's.[3]

Though Hayato is an independent teenager, as a child he enjoyed the bonding moments he and his father shared. After Hebihara taught him how to use a shaved ice machine, Hayato used it to make frozen treats to give to him.[4]

They don't particularly hate each other's company, getting along just fine. When Hayato had injured his wrist in Chapter 99, Hebihara offered to retie the bandage for him since it was coming loose. They have a typical father-son relationship even after Hebihara and Shizuka separated.

Ryuu and Hayato ran into each other a few times following their first encounter, both in class and when it was time for Taka to go home. It wasn't until Hayato became a member of the Babysitter Club that they really got to know each other.[5] The methods one had on being a big brother (and childcare in general) seemed like alien concepts to the other. They sometimes get into debates over how to handle the children, but a mutual respect over their differences has developed.

Like their other classmates, Hayato is prone to being stunned at Ryuu's naivety and obliviousness, especially when it comes to romance. While Hayato chooses to avoid such relationships, he is at least aware when girls show interest in guys. Which is why he was baffled when Ryuu considered himself to be undesirable.[6] 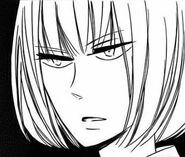 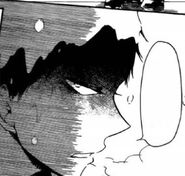 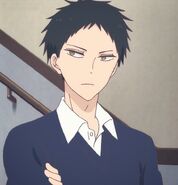