Mika Inui is the assertive younger sister of Hiroyuki.

Mika has purple eyes and shoulder-length blonde hair kept tied in a bun to the side and is generally seen in her middle school uniform.

Mika is very expressive, reacting strongly at any provocation—she becomes easily angered at her brother. Most of the time, she is very blunt and dismissive towards people she's uninterested in.

When it comes to romantic pursuits, she's just as ambitious and conniving as her brother (and is just as unsuccessful). Her plans involve setting up situations where she'll bump into Hayato and win him over with an act of innocence. However, she can't maintain the charade, as even the prospect of coming face-to-face with her crush Hayato and embarrassing herself in front of him causes her to bashfully fret.

Mika does have a genuine sensitive side. She was humiliated and distraught when Taka took one bite of the bento she prepared for his brother and spit it out in disgust.

Mika frequently calls Hiroyuki and the things he does "gross." She does not view him as an older brother anymore than his underclassmen view him as a Senpai. Likewise, he often tells her that she does not act like a precious little sister. However, they shared a brief touching moment when she learned he ate her failed bento. The moment was ruined when the resulting indigestion caused the two to bicker once more.[1]

Their frequent clashing drives Mika to look elsewhere for an older brother figure in her life at times. However, Hiroyuki doesn't let her replace him, especially not with somebody else's older brother.[2]

Ever since her friend shared a picture of Hayato with her, Mika has harbored a schoolgirl crush on him. She often fantasizes about the romantic things he'll say when he sees her acting innocent. She first tried to invoke such an encounter by preparing a bento for him, then going to his school to meet him and pretend she got lost trying to deliver it to her older brother. However, her plan went awry the moment her failure to keep her composure attracted attention. What's more, she learned that Hayato's picture didn't do the real thing justice, and she couldn't even face him.[1]

Though her initial plan ended in failure, she didn't give up. Her next plan involved using Ryuuichi as a proxy to determine the characteristics of Hayato, including his dream girl, in order to win him over with the perfect Christmas present. This too, went nowhere, but she hasn't given up.[2] 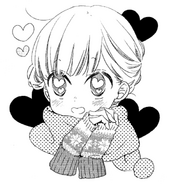 Mika in the manga

Mika looking at a picture of Hayato