Kōtarō Nishiyama (Japanese)
Ryuuichi Kashima is the protagonist of the Gakuen Babysitters series. He is dearly loved by his younger brother, Kotaro and the kids in the daycare.

He is of average height with dark hair and large eyes. Considered to be one of the most attractive boys in the class (the other being Hayato Kamitani), his female classmates have complimented him on his "healing vibes" and being gentle when handling his brother.[1] He has a soft, feminine appearance, which makes him easily believable as a girl when wearing a wig.

Ryuuichi is a kind and easygoing person. He easily befriends the children and is loved by all of them. When Taka is crying, he is usually seen comforting the sobbing child and is regularly sought out by the children when upset.

He is also somewhat absent-minded, appearing to be completely oblivious to his popularity, particularly to the fact that Maria Inomata and Ushimaru Yuki have feelings for him. He has gone as far as to think girls weren't interested in him at all. On the contrary, most girls don't pursue him romantically only because they feel they can't compete with Kotaro for Ryuuichi's affections.

This oblivious aspect of his nature also makes it a common occurrence for quiet individuals such as Yayoi and Saikawa to approach him from behind and surprise him.

Despite his gentle personality, he tends to speak his mind when he feels strongly about an issue. For instance, on seeing Hebihara coldly pushing his son, Hayato, away, he shoved angrily in Hebihara's hands his report which included details of both his sons' happenings in the daycare room as well as the recent photo with the other fathers of the children, noting Hebihara's negligence as a father.

Ryuuichi is the firstborn son of the Kashima family and older brother to Kotarou. As a child and even after Kotarou's birth, Ryuuichi considered their parents "free spirits" who loved to travel and explore new places, which often left Ryuuichi alone to take care of Kotarou. Shortly before the start of the series, his and Kotarou's parents tragically die in a plane crash while on holiday, leaving the two brothers as orphans.

Coincidentally, the chairwoman of Morinomiya Academy's son and daughter in law also died in the same plane crash, and at the memorial the two brothers catch her eye because they were the only people other than herself who didn't shed a tear. This prompted the chairwoman to adopt Ryuuichi and Kotarou, but only under strict pretences that Ryuuichi join the academy's babysitting club and help care for the young children there everyday before school. He starts as a third-year middle school student at Morinomiya Academy and advances to its high school alongside Kamitani and the rest.

As the only family they have left is each other, brothers Ryuuichi and Kotaro share one of the strongest bonds in the series. Even before the loss of their parents, Ryuuichi was practically a third parent to Kotaro. The two of them are always fussing over each other, neither one willing to let the other to be so much as disappointed. Ryuuichi is a very patient big brother, even on rare occasions when Kotaro has broken his things as a baby in the past.[2]

Casual observers of their relationship find their dynamic to be adorable. However, there is also concern amongst their friends about whether or not they will ever be able to function without each other. Ryuuichi shares this concern, and often tries to get his little brother to become more independent.

Youko first encountered Ryuu and Kotaro at the memorial service honoring those who died in the plane crash, including the Kashima parents and the chairwoman's son and daughter-in-law. She noticed the two of them were, like her, not crying along with everybody else in attendance.

Not long after, she became the legal guardian of the brothers and moved them into her mansion. Her conditions were that Ryuu transfer to her school and do well academically, and become the first member of the Babysitter Club. Ryuu gave no argument, and out of gratitude strives to meet all of her expectations. His assigned duties in the daycare soon became a labor of love, but Youko makes him put them aside whenever he needs to study for upcoming exams. While Youko is this strict by default, Ryuu knows that she only works them hard for her own good. Both he and Kotaro soon came to regard her as family, and refer to her as "Oba-san." Ryuu grew to love her to the point where he panics whenever he thinks her well-being is threatened.[3][4]

Given that hitting Taka was one of the first things Hayato was seen doing, it took some time for Ryuu to get comfortable around him. But once Hayato joined the club, the two became friends who spent much time around each other even outside of school. They opposing viewpoints on taking care of the children actually make them a great team in the daycare.

Ryuu is able to trust Hayato thanks to the latter's rare glimpses of brotherly instincts. But Ryuu wishes Hayato wasn't so reserved when it came to expressing his emotions. Ryuu often tries to compel Hayato to be more open about his feelings, usually for Taka's sake. These appeals for more sensitivity usually just annoy Hayato, but Ryuu doesn't get discouraged in the slightest.[5][6]

Ryuuichi crying after being left alone

Ryuuichi crying over his goldfish 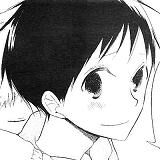 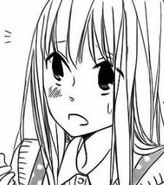