Atsumi Tanezaki (Japanese)
Kazuma is the younger twin brother of Takuma and is the son of the P.E. teacher, Mamizuka Umi, and a famous actor, Mamizuka Kousuke.

Kazuma has blonde, unkempt hair and light brown teary eyes. He is generally seen as the "cry baby" of the bunch and is seen with rosy pink cheeks. He is the identical twin of Takuma and is always seen holding his hand or following him around. While his older brother is known for sharing an "eye smile" with their mother, Kazuma's perpetually watery eyes bear resemblance to his emotional father's when he cries.

He is the more conservative and fearful twin of the two, and he shares these traits as his father, Kousuke. He is easily startled by new things and cries easily in almost every situation, needing comfort from his twin brother frequently. Thus, he forms a strong bond with his twin even though he is easily discouraged at times when his brother's straightforward personality leads to him saying hurtful words.

He generally needs ample encouragement to do the things that he wants, which has led to him being very dependent on Takuma. When his older brother expresses a want to do something, such as washing Ryuuichi's back on their hot spring trip, Kazuma usually follows. When an illness forced him the twins to separate, Kazuma's loneliness drove him to spend the whole day crying out for Takuma.

He is generally an agreeable toddler, avoiding conflict with the other children. He is not as playful, destructive, or rambunctious as Takuma and Taka are.

Kazuma's closest relationship is with his twin brother. He and Takuma dislike being kept apart from each other, and Kazuma cries out for his brother if they're separated for any duration. He often mimics or echoes Takuma's words and actions when interacting with others in the daycare room.

While the twins usually see eye-to-eye on many things, disagreements do come up every now and then. One of Kazuma's greatest fears is going into water, whereas Takuma loves playing in the ocean and in pools. Kazuma doesn't have much luck trying to get Takuma to play with him somewhere else. Despite his fear, Kazuma decides that he doesn't want to keep his brother and their friends from having fun, so he'll watch them splash around from a distance.

Like any toddler his age, Kazuma is deeply fond of his mother. She can usually get him to stop crying by patting him on the head and encouraging him. However, her presence alone is not enough to soothe him when he and Takuma are separated for long periods of time. This can be observed when Kazuma fell ill and cried for Takuma continuously, and his mother gave in and brought him to see Takuma as soon as his fever receded.

Umi is very trusting and supportive of both of her children, allowing them to run an errand together at their young age while she stayed waiting at home and calling scratches after Takuma fought with a cat a "sign of a man."

Kazuma truly is his fathers son. The two of them are prone to crying even when things aren't as bad as they could be. Kazuma loves his father, though he and Takuma rarely ever express it in front of him. The two are always asking Umi to watch Kousuke's filmography, though as children they have trouble separating fantasy from reality.[1] Kazuma is especially prone to seeing his father as a scary stranger, seeing as how often Kousuke winds up playing antagonists.

Kazuma was scared of Hayato when he first began as a babysitter, due to his intimidating demeanor and violent way of disciplining Taka. However, after Hayato saved the freshly-hatched chicks (and Kotaro) from a cat, Kazuma began to admire him greatly behind closed doors. This admiration was so great that Takuma began to copy each action of Hayato's to become someone his younger brother could look up to as well, much to Taka's dismay.

Takuma and Kazuma as Teenagers (End Card of Episode 7)

An odd instance of both twins about to cry.

The twins with straight bangs 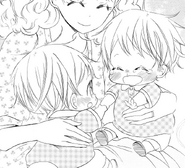