"Thank you fow wooking aftew me. I'wl be a good giwl. Mummy towd me to be good."
―Kirin to Kashima Ryuuichi[1]

Kirin Kumatsuka is the oldest of the only girls (baby Midori) at the daycare. Her mother, Yayoi is the drama teacher at the school and her father, Satoru is a freelance photographer.

Kirin has reddish-brown eyes and dark green hair, which she normally keeps tied in pigtails. She often wears collared dresses or pinafores, as well as white balloon shorts. She is often seen carrying around a large, stuffed toy giraffe, a beloved possession.

She is very friendly and sweet. She likes to play house and becomes friends with Maria Inomata, who returns to the daycare repeatedly to meet her, and is happy to have an older sister to play with. She also takes care of the baby girl, Sawatori Midori, behaving like an older sister herself.

She is smart and eloquent, often clashing with Taka over differences in opinion, such as who is a better friend to Kotarou or the game for the day. Although this personality clash seems to suggest their friendship is unsteady, like when she once tattles on Taka for upsetting Kotarou, the two always put aside their differences and often come together when they agree. Taka is also the only child who provokes Kirin unnecessarily, with Taka arguing that witches and magic do not exist, resulting in retaliation from Kirin as she goes to dangerous lengths to prove him wrong.

Kirin cries with big watery eyes and red cheeks when she fails at doing something or even when someone dislikes a favourite thing or person of hers. She has a lot of ideas and is helpful to others.

She is the only child of Kumatsuka Satoru and Yayoi Kumatsuka. Kirin is well-loved by her parents, especially Satoru, who is overly protective of his daughter.

Kirin once claimed that her mother, Yayoi, is her "favourite person in the world". Unfortunately, Yayoi's responsibilities as the head of the Drama Club often forces the two to spend time apart. Though Kirin understands how important her mother's work is, the loneliness she feels often becomes too much for her to bear. Yayoi often tries to make up for these absences by arranging special mother-daughter activities for the two of them.

Kirin is showered with affection courtesy of her doting father. He tends to behave quite immaturely around her, so she gets to act like a "big sister" to him as well.

Kirin does not understand why Satoru isn't nice to the boys at the daycare. She assumes he's just being a bully, causing her to shun his company and tell him she hates him.

Kirin as a Teenager (End Card of Episode 9)

Kirin and Inomata in the Ending Song (Episode 7) 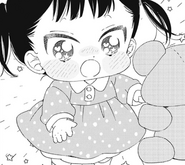 Kirin in the manga (chapter 51)

Kirin with her hair down (chapter 96) 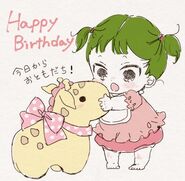