Actor
Kisakata Asahi is an actor and Kousuke's coworker, playing Justice Knight, the hero of the superhero show that Kousuke co-stars in.

Kisakata is known as a 'flower-boy' within the manga as he's considered youthfully handsome compared to the other men within the story. He has light colored eyes and light-short trimmed hair.

He is frivolous and unserious to the point that fans are unable to recognise him for the serious character he plays and he even tries to teach Kousuke to make a cute face instead of taking responsibility for things his senior has done.[1]

He admires Kousuke enough to join him and most of the male characters on a trip[1] and even comes to the Babysitting Club to help Kousuke.[2] He proves to be useless when he admits it to be too embarrassing to play his character outside of work, disappointing the children. However, later on the trip, he reprises the role to "defeat" some mosquitoes plaguing Kotarou and Taka.

He is a playboy, taking advantage of his free time to declare his want to go flirt with some girls.[1] He has made at least one attempt to go out with his other co-star, Yuuko. However, she had to cancel on him.[3] 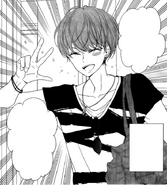