Nozomi Furuki (Japanese)
Kotaro Kashima is one of the main protagonists and is the younger brother of Ryuuichi.

Kotaro has short, light-colored hair and a sleepy look on his face. Occasionally, his eyes sparkle whenever he's excited or happy about seeing his brother or something intriguing like hatching chicks. Like the other kids in the daycare, his cheeks appear to blush whenever he's curious or about to burst into tears.

Kotaro wears clothes with a small picture of a tiger (relating to his name which means 'tiger') often. At other times, he's also seen wearing a panda hoodie.

In the daycare center, Kotaro's often seen reading a book quietly in one corner, or requesting Ryuuichi to read him one of his choice often.

Kotaro's quiet and well-behaved, or on some occasions being the only child at the daycare to not cause trouble for the babysitters. He's very attached to his older brother, and sometimes he gets upset when the other kids hold his attention. He appears to be fond of the chairwoman and calls her "Fluffy" ("Shaggy in the anime), referring to her big hair which makes her resemble a sheep.

Kotaro's well-liked by the other kids and he's very considerate of their feelings, on one occasion choosing to stay overnight with Usaida to avoid picking one friend over another. He appears to dislike conflict in general, and he tries to mediate an argument between Kirin and Taka but it doesn't work.

Also Kotaro's a strong and determined kid as he's seen by his attempts to make lemon tea for Ryuuichi when he's sick, and climbing a flight of stairs to deliver Ryuuichi's lunchbox he forgot to get. In addition, he appears to be comfortable in the arms of strangers or acquaintances, and he trusts them easily. He doesn't cry easily, only doing so when he perceives Ryuuichi if he leaves him, or having his efforts go to waste.

In contrast to his painfully oblivious older brother, Kotaro's very observant for his age. He is able to perceive tiny details, such as ants, that go unnoticed by Ryuuichi or others.

Kotaro has one brother, Ryuuichi, and his deceased parents who died in the plane crash. After the incident, they're adopted by Youko Morinomiya, the chairwoman of Morinomiya Academy who offers to act as their guardian until Ryuuichi's an adult on the condition that Ryuuichi makes use of his experience taking care of the kids in the school's daycare center.

In the past, Kotaro's shown to be a naughty kid who destroyed his brother's project whose personality is a little bit different. When Kotaro first arrives in the daycare room, he's very apprehensive about the new situation. Then Taka takes to him quickly and sees him as a playmate, or a "monster", which Ryuuichi quickly interferes for his brother to slowly adapt. Eventually, Kotaro gets sick and with Hayato's help, he locates a nearby pediatrician. Then Kotaro cries for his brother who's talking to the concerned chairwoman. The next day, Kotaro starts warming up by reading with the rest of the children, visibly in a better mood.

Kotaro shares one of the strongest bonds in the series with his older brother, Ryuuichi. He goes out of his way to ensure Ryuuichi's happiness, to the extent of ensuring that his brother is well-liked by others often. For instance, when Inomata's mistaken as someone who dislikes Ryuuichi, Kotaro appears to be dejected and he's encouraged by Kirin to show his brother's charms to comic effect.

Kotaro can't stand the thought of seeing Ryuuichi as anything other than his brother, not even when the group is playing pretend. During the Setsubun Festival, he cried when he learned that he was expected to throw beans at Ryuuichi, who was playing the part of an oni.

Kotaro adores Youko as if she were his own grandmother, though their relationships had some rough spots. When he and Ryuu were still getting settled into the manor, Kotaro was prone to calling her "Fluffy," alluding to her wool-like hair. On one such occasion she was quick to threaten him with the "punishment" of giving him the same hairstyle. When he saw her holding a knife during preparations for the ill Ryuu's meal, images of oni popped into his head.[1][2]

Kotaro frequently gives her small objects he finds as tokens of sincere affection. She'll usually ask him why he keeps giving her rubbish, but she'll accept and keep them all the same. Kotarou will get incredibly worried if she gets unwell, and begins crying if she has to go away on business.[3][4]

When Kotaro first met the other children, one of the first things Taka did was appoint Kotaro as the monster in their hero game. Ryuu stepped in and insisted on being the other children's playmate that day, while Kotaro sat in the corner by himself with a book. When Taka approached him the next day with asking if he wanted to join everyone for storytime, Kotaro agreed. Ever since then, Taka and Kotaro became close friends.[5]

While Taka jealously claims to be Kotaro's best friend, Kotaro himself is rather vague on whether the feeling is mutual. He treats all of his friends at the daycare equally, though Taka's perseverance does result in the two spending much time together. Often, Taka's usual bravado falters, at which point Kotaro usually steps in to comfort him. Such times include when Taka was worried that he didn't behave well enough to get presents from Santa and when he learned that Hayato wouldn't be joining their first sleepover at the nursery. In the latter case, Kotaro was even willing to agree to Taka and the others sleeping together with Ryuu, who he usually wants to himself.[6][7] 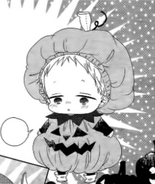 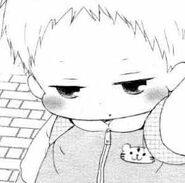 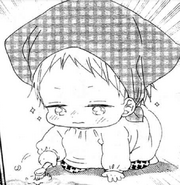 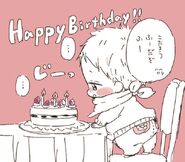