Maria is a beautiful teenage girl with mid-back length dark forest green hair that has bangs hanging on the left side and gray colored eyes. Like in the manga, she maintains her tsundere personality and her face slightly blushes at her cheeks whenever she becomes embarrassed.

Maria is a slim girl of average height for her age with straight black hair that is parted to the left side of her face, dark colored eyes and she normally keeps a cold and angry expression, but she quickly tears up or turns red when emotional — in line with her tsundere personality.

Maria has a harsh personality and low tolerance for those who come to school for reasons besides studying, which distances her from the other students. She also has a strict policy on following the rules, and gets furious when others do not. Her strong personality also defends her well against gossip.

She tries hard in everything she does, be it studying, club activities or playing with the children. Although she is devoted to her studies and does not initially try to get along with her classmates, she feels the strain of being alone and becomes more eager to make friends—being noticeably happy when she first shares contact details with new friends (only having her parents' info before). She is a member of the cooking club, though her skills were somewhat limited (the cookies she baked were too tough to chew). She improves her culinary skills over time, to the point where her classmate Yagi considers her capable of teaching others how to bake cookies.

She is quick to flip between being cold or angry to upset or embarrassed, often due to her awkwardness with social situations from studying all the time. She loves the daycare children but does not express it well. She is adored by Kirin who sees her as an older sister figure despite her gruff behaviour. Despite her anxiousness in unfamiliar situations, she is considerate to others especially Ushimaru, and avoids causing trouble for them.

Inomata appears to be the only daughter of Gorou and Kimie, both of whom uphold principles of strict upbringing with their child. It was revealed that Maria was not allowed to watch television even as a child, and when discussing Kirin's favourite anime, "Petit Pois", she had no idea about the show's characters, though she took a liking to it when Usaida played it on his handphone for her to watch.

She first appears when the daycare children follow Ryuuichi through the school, to which she publicly chides him for his negligence. The next day, she sees Shizuka Kamitani carrying a stack of folders and offers to help. The teacher asks a favour of her, asking Inomata to take her son, Hayato's lunchbox to the daycare. Inomata arrives to hear Ryuuichi trying to comfort a despondent Kotarou and tells him that he has "no reason to be upset" by her comments, but she argues that the reason is obvious—it is due to Ryuuichi's negligence.

Usaida, after reading a message from Shizuka, pretends to have a stomachache and forces Hayato to take him to the nurse's office. Usaida leaves both Inomata and Ryuuichi in charge of the children, not giving Inomata a chance to complain. When Ryuuichi tells her he is fine to care for the children on his own, Inomata refuses the way out, saying she will not be so irresponsible to leave the children all alone.

When the children refuse to approach her, Inomata offers to hold Midori for Ryuuichi, but her loud and angry voice accidentally makes Midori cry and the children attack her, with Taka calling her a "baddie". Asking who he is calling a baddie, she accidentally scares them into submission and they cower behind a table. Ryuuichi tries to make the children apologise, but she tells him not to bother, seeing that he is in a worse and more "pitiful" situation.

But Ryuuichi tells her she is mistaken and that he is truly happy, she starts throwing toys at him and shouting, realizing her own situation is more pitiful with the children fearful of her and her classmates perceived to be hating her because all she can do is study.

She cries openly, frustrated, but is comforted by the children who relate to her pain and cry in sympathy too. She holds them close and exhausts herself crying, accidentally falling asleep with the children and waking up when the kids have arisen and are eating lunch. Embarrassed, Inomata claims that she does not skip class like this while Ryuuichi apologises, telling her she would not wake up after his attempts to do so.[1]

After repeatedly meeting Ryuuichi, it becomes clear that she has developed a crush on him (though she does not know it), even going so far as to try to make him Valentine's chocolates.[2]

It is through their mutual affection for Ryuuichi that Ushimaru and herself become friends. Ushimaru later introduces Inomata to her other friends over New Year's.

When the daycare children (along with Ryuuichi and Hayato) invite her to play in the snow and she goes (to the shock of her mother), she accidentally brings along fellow advanced class student, Yagi Tomoya, who had saved her from falling over into the snow and calls the Nezu siblings to play as well.

Ryuuichi invites Ushimaru too and Usaida shows up carrying Midori, then asks Inomata if she has ever made a snowman before, saying she gives off a "vibe" that she has not. Inomata says she did once in elementary school, but admits to having done it alone, inspiring everyone to build their own snowmen for her.

The ridiculousness of everyone's creations makes her laugh, but she questions Usaida's opinion that the one she helped make is equally weird. Ushimaru encourages her to send a picture to their friends and she is characteristically baffled by their response, not understanding the shorthand for laughter and kaomoji.[3]

Inomata had overheard others having conversations about her tendency to be hung up on school rules, including some of Ushimaru's friends. Ushimaru herself had never spoken against Inomata, who nevertheless directed reprimands towards the whole group for gossiping so openly.

It wasn't until Ryuuichi received a love letter that the two of them began crossing paths more frequently. Both harbored feelings for him, so they both headed to secretly watch to see if he would reciprocate the sentiment to the writer of the letter. They ran into each other, and then Ryuuichi, who was distressed about Kotarou having wandered off. The two agreed to hep him search before Kotarou turned up safe and sound in the company of the Kamitani brothers. The two then spied on Ryuuichi together as he turned down the girl who left him the love letter. Inomata denied Ushimaru's insinuation that she was worried Ryuuichi would reject them as well. Ushimaru extended an offer of friendship towards Inomata, asking if she could called her by her given name. Inomata accepted, though such forward interactions would take some time getting used to.[4]

Maria had a bad first impression of Ryuuichi. When she saw the noisy daycare children following him down the hallways, she believed him to be a big troublemaker. She talked the apologetic babysitter's ear off for disturbing other students during school hours. Shizuka and Usaida believed that the tightly-wound Maria could benefit from learning how to be more relaxed and approachable like Ryuu. Thus, they worked together to have her spend an afternoon in the daycare.[1] Their intuition was right, and Maria found herself visiting more often to play with the children. She continued to reprimand Ryuu whenever she caught him paying little regard to school regulations, but to her surprise he was prone to addressing her with warmth, kindness, and respect.[2]

When Maria realized that she was developing feelings for Ryuu, she was hesitant to return to the daycare. Not wanting to lose her composure around Ryuu, she began using her academic responsibilities as an excuse to keep her distance. She was unable to keep this up, because she missed the children as much as they missed her.[5] When Maria learned that Ryuu received an anonymous Valentine, she was overcome with curiosity as to how he would respond. On the day the sender requested a response, Maria left for school early to observe the meeting (she unconvincingly denied this was the reason though). In the process, she bonded with Yuki, and the friendship she formed helps both of them cope with the likelihood that Ryuu was unlikely to reciprocate either of their feelings.[4]

Maria gets offended when Ryuu expresses surprise that she does things other than study, and makes it very clear to him every time.

Inomata and Yuki as Toddlers (End Card of Episode 8)

Inomata Sleeping with the Kids (Episode 2)

Inomata and Kirin in the Ending Song (Episode 7)

Inomata in the Manga 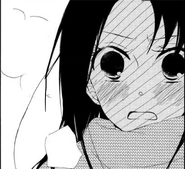 Flustered Inomata in the Manga (Chapter 17) 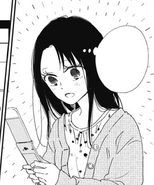