Motohiro Ōta (Japanese)
Nezu is a scholarship student in the Advanced Class at the Morinomiya Academy with Maria Inomata and is best friends with Yagi Tomoya, who also refers to him as "Chuukichi". He is the second son out of six children.

Nezu is tall and slender. He has black, unkempt hair that sticks up at the ends and bangs that cover his dark eyes entirely, though they are shown when he is talking at times. He has a serious and sullen expression, rarely seen with a smile.

Nezu is a calm and reserved teen. He is very practical in his actions, having to care for his many siblings. In addition, he is also studious and hardworking, ending at the top of his class second only to Inomata.

He is serious all the time, retaining a mostly deadpan expression when dealing with problems, such as his siblings breaking into the chairwoman or Ryuuichi's home as they are running away from home, and of course managing Yagi's behavior around the children. He also displays a polite manner and etiquette in social situations like a proper adult.

Nezu is the second eldest son of six children. He has one older brother, Daikichi, three younger brothers, Shoukichi and the twins, Kichi and Suekichi, and only one younger sister, Kyouko. He comes from a poor family and these special circumstances led him to work multiple part-time jobs, something which is uncommon with the other peers at the school. He shows kindness to Yagi in his childhood, who reciprocates by sharing his toys and games in return for companionship. It was once revealed that Nezu would rather create something he wants himself, instead of buying it. (due to tight budget). His siblings thus respect him as an older brother due to his sacrifices as a result.

Despite Daikichi being the eldest of their siblings, his clumsiness makes him rather unqualified to be a good role model. Thus, it fell on Chuukichi to be the reliable son. Without that responsibility, Daikichi grew up to be quite carefree (and careless). This results in problems Chuukichi finds himself having to resolve.

Chuukichi loves Daikichi, despite his many flaws. When they were the only children in the family, Chuukichi watched in admiration as his older brother became more and more independent, and was eager to prove himself as well.[1] As the family grew, Chuukichi even stated that one of the primary reasons he wanted to get rich was so that Daikichi could destroy as much property as he wanted without having to worry about paying for damages.[2] Chuukichi actually depends on his older brother to look out for his well-being, so he never protests when he's reprimanded for pushing himself too far.[1]

The Nezu twins get up to a lot of mischief, but Chuukichi understands that they're not trying to cause problems for him. Ever since Tomoya became obsessed with cute children at the sight of his smiling baby brothers, Chuukichi has had to threaten Tomoya to keep his distance. To this day Chuukichi warns Kichi and Suekichi to not let the "pervert" take them away.[3] They "help" with dealing with Tomoya by rescuing any children they catch him harassing, such as their sister.[4] Though Chuukichi appreciates their intentions, he must admonish them for what amounts to a kidnapping.[3]

The twins idolize Chuukichi, and constantly praise his many skills and traits to anybody around. Chuukichi works hard to be worthy of such respect, and sometimes spoils them whenever he can find discounts on the toys they want.[5] But with the high value he places on truth, Chuukichi sometimes does things that threaten to destroy their innocence. He once almost explained to them how it's only possible to get meat from a cow by killing it before Ryuuichi hastily changed the subject for their sake and Kotaro's.[6]

Tomoya is, for better or worse, the best friend Chuukichi has. Chuukichi is constantly annoyed by Tomoya's obsession with cute children and the nosebleeds it causes him. Threats of reporting such perverted behavior are frequent. Oftentimes he wonders why the two of them are friends at all, to the point he'll deny they're friends out loud.

For all his grievances with Tomoya, Chuukichi does show him friendship every now and then. It was Chuukichi who initiated their bond in the first place when he invited Tomoya to his home so he wouldn't be lonely on his birthday.[3] He appreciates that Tomoya was the one classmate in elementary school who never looked down on or pitied him for coming from a poor family.[2] In the present day, Chuukichi is even willing to spend some of his free time at Tomoya's house. 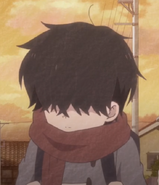 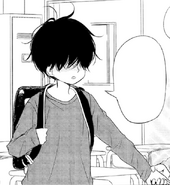