Kyouko is the youngest of the Nezu siblings and the only daughter of the Nezu family. She is a first-grade elementary student.

Kyouko has long black hair kept tied in pigtails with bows, but with a messy fringe that covers her forehead and eyes. She normally wears a dress and carries her backpack with her as well.

Kyouko is the youngest child in her family, having five older brothers. Her brothers (from eldest to youngest) are Daikichi, Chuukichi, Shoukichi, and the twins Kichi and Suekichi. She makes small appearances with her older brother, Chuukichi initially, and officially meets the children of the daycare room when Yagi proposed for her to visit them.

As Kirin is giving Taka the silent treatment because of his rudeness in destroying her dinner for him when playing house, Kirin is visibly in an upset and lonely mood. When Kyouko arrives, she becomes Kirin's new playmate which made Taka jealous once again. However, the good times between the two girls are short-lived as Kyouko's twin brothers got wind of the creeper, Yagi's supposed "kidnapping" of their younger sister, and they immediately went to her "rescue". Kirin becomes distraught at Kyouko's leaving — though she promises to visit again to play. She returns with a book of ghost stories which are popular with her classmates in another day, which accidentally made Taka afraid of going to the bathroom alone.

Out of all her brothers, Kyouko naturally looks up to Chuukichi the most. His sweet and considerate manner of speaking to her leads her to follow his every example. Kyouko thinks highly of Chuukichi's wisdom. She initially refused Yagi's offer to spend time with him simply because Chuukichi warned her to avoid such a weirdo.[1] When she wished to become an idol, she asked him if he thought she had what it took.

Kyouko likes assisting Chuukichi with chores, particulary in the kitchen.[2] She even once tried to take the initiative and prepare onigiri for him to eat when he arrived home. She was delighted when he was the first to praise her efforts, and wanted to make him and their brothers more.[3] 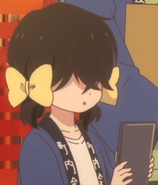