Sawatari Midori is the only infant under the care of the daycare and the daughter of Sawatari Yukari.

Midori has light-colored hair that starts out short at the beginning of the series, but it grows out and becomes more wispy as time goes on. Eventually, she starts wearing her hair up in a small bun atop her head with a pink bobble hairband. Her hair color varies between media, with Midori having blonde hair in the manga, and light-brown hair in the anime. She has deep, black dot-eyes with two, single eyelashes that stick out on each, a button nose, and rosy cheeks.

She is generally seen on the back of Usaida or in his arms.

Midori is bubbly and energized most of the time and generally says "abu" in agreement with other people. She has a generally rampant attitude as can be shown when she gets angry over being teased, and when she refused to let Ryuuichi change her diaper. Having spent so much time around Usaida, she has developed a deep bond with him and truly seems to miss him when he isn't around. Her first word was an attempt to say Usaida's name. Even at one point copying his hand gesture

Midori is more aware of what goes on around her than most people give her credit for. She was annoyed when Satoru didn't realize she was a girl sooner, and had an offended facial expression to show it. When Taka began to feel neglected because his baby cousin Tsugumi was visiting, Midori intentionally soiled her own diaper as a means of suggesting to him on how to regain everyone's attention.

She develops a close relationship with the other girl in the daycare room, Kirin. They are often seen playing together.

Midori is the daughter of Yukari, a teacher who works at the office within the academy, and Yutaka, a traveling archeologist.

Midori is adored by her mother, who spends all of her free time with her. From what little personality she conveys in front of Yukari, it can be inferred that Midori likes having her mother to herself whenever she's around. She'll cry in order to get her mother's undivided attention.

While Midori is a sweet child, she does get up to mischief around the house from time to time. Yukari has mentioned that Midori has caused her trouble by scattering many objects she gets her hands on.

Despite the brief time they spend together, Midori and Yutaka might share the strongest father-child bond out of all the daycare families. Whereas Kirin and the twins expressly prefer their mothers and Taka doesn't even know his father's identity, Midori is always happy to see her father return from abroad.

Yutaka's beard is one of the characteristics most recognizable to Midori. When he shaved it off, she cried as if she were looking at a stranger. She's gotten more used to his occasional clean-shaven face over time, however. 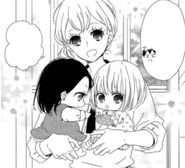 Midori as a teenager (End Card of Episode 5)

Midori at the Zoo (Episode 2)

Midori in her onion costume held by Kumatsuka Satoru (Episode 10)

Midori in her swimwear (Episode 9)

Midori crying after having an accident (Episode 11)