Yuna Kamakura (Japanese)
Sawatari Yukari is a school secretary at the Morinomya Academy and is the mother of Midori, the only baby at the daycare.

Yukari has an easygoing and gentle personality, she's rarely seen in a bad mood throughout the series.

She's good-natured and kind to both of the kids at the daycare and the students in the academy.

Yukari has an infant daughter named Midori, and she's married to her archaeologist husband, Yutaka, who often travels to Turkey on long archaeological excavations. Her husband's absence caused Inui to falsely believe he was dead and combined with her gentle beauty, led him to fall in love with her. She was mildly upset with Usaida on a special occasion when Midori said her first word which referred to his name instead of "mama" or "papa". Nevertheless, she sees Usaida as a friend who once accompanied her to a maternity class in lieu of Yutaka, who was in Turkey at that time. She's curious about Usaida's love life due to his secrecy about it, and she tailed him to see if he's dating someone.

Yukari is proud to be Yutaka's wife. As much as Yukari misses him when he's away at work, she admires Yutaka for always pursuing his dream in archaeology.[1] He once felt that he didn't look as handsome as other husbands and fathers, but Yukari assured him that the gentle, kind man she fell in love with didn't need to change anything about himself.[2]

While not as experienced as her coworkers at motherhood, Yukari is committed to raising Midori as best she can. Even during her pregnancy, Yukari was willing to endure whatever pain she felt for her child's sake. With such an energetic baby, Yukari often has to keep Midori out of mischief. During these early stages of her daughter's childhood, Yukari tries to impart lessons of behavior whilst also cleaning up after her.[3] Most of the time, Yukari coos over her daughter when they're at home together.[4] 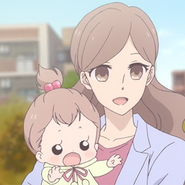 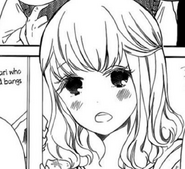 Yukari when she was younger 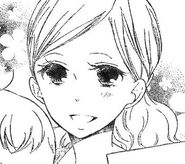 Yukari in the manga