Kento Fujinuma (Japanese)
Sawatari Yutaka is the dad of Sawatari Midori and Sawatari Yukari's husband. He's an archaeologist and his job regularly keeps him away on expeditions.

His facial features are always hidden by his thick beard and hat. He has a deep booming voice which it makes him appear to be much older than he seems.

He's dependable and a man of a few words. Like Kumatsuka Satoru, he's shown to be attached to his daughter, though, not on the same fanatical level. He's also a loving husband to Yukari.

He is the father of Midori and is married to Yukari, the school secretary.

Yutaka has found himself wondering just what a beautiful young woman like Yukari sees in a scruffy older-looking gentleman like himself. When he compared himself to the other fathers at the daycare, he began to feel that he was not good enough for her. Holding her opinion in high regard, Yutaka shaved his prominent beard in order to see if it made him look younger.

Yukari told him he was being silly, and that she considered him the world's most gentle husband. With renewed confidence, Yutaka shared a precious moment of affection with his wife and daughter.[1]

Due to his work, Yutaka is mostly absent from his infant daughter's life. But there's no denying that he loves her deeply, and is protective of her as well. A murderous intent emanated from him when he saw her in the arms of a stranger.

Despite the short time they spend together, Midori is familiar with her father's face. But she had a very distinct image of her father for a while. When he shaved his beard, Midori found him to be unrecognizable and began crying. It was only when he put on a Santa mask that she became placated.[1] She appears to have gotten over this confusion, as she did not cry around the shaved Yutaka during the New Year Festival.[2] 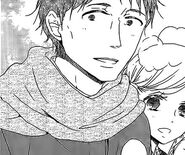 Yutaka without his beard 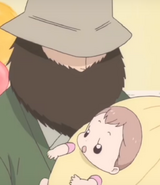 Yutaka with his daughter

Yukata's first appearance in the manga