Taizo Hebihara is the father of Hayato and Taka Kamitani and the ex-husband of science teacher Shizuka Kamitani. He is the high school chemistry teacher at Morinomiya Academy.

Taizou has short, light colored hair that is parted in the middle and frames both sides of his face. He has narrow, slanted eyes with small irises. His expression is normally stern and expressionless (like his son Hayato), only changing when he is especially emotional.

He is shown to be a cold and uncaring person, like his son Hayato. He is a very strict teacher, marking students as absent if they are too late or quiet to reply and forcing them to do work under harsh deadlines and during their free time. Even outside of his job, Taizou was considered to be very strict at home when raising his son Hayato and scolding his ex-wife Shizuka for Taka's wild and spoiled behavior. He is considered distant, as noted by Ryuuichi, causing Hayato to recount how he was told not to treat him like his father in school and even referring to his son only by his surname "Kamitani" in class.

However, it is shown that he has a very caring and fatherly side as well—sending Taka and Hayato anonymous presents for Christmas and generally spoiling Taka with gifts[1] and giving advice to Hayato (at first, only after Ryuuichi's intervention.

Taizou first met his now ex-wife Shizuka Kamitani when he was teaching in high school. When Shizuka ended up in the school's health office after fainting because of her lack of nutrition and eating, Taizou strictly and sternly forced her to eat a bento lunch he actually made for himself. Shizuka, feeling guilty about eating his lunch, offered for him to share it with her, sparking her romantic interest in Taizou. At some point after in their lives, the two married and had their first born son Hayato, but they divorced shortly before their second born son Taka was born, leading Hayato to resent him and refer to him as only his "birth father" while Taka has yet to learn his identity.

In the past, Hebihara showed great concern over Shizuka passing out because of the diet she was on. After a stern lecture of about the dangers of a growing girl neglecting proper nourishment, he gave her food to eat. It was only when his own stomach started growling that Shizuka realized that he gave her his own lunch. After pointing out his hypocrisy for neglecting his own meals, Shizuka realized how caring Hebihara was capable of being, and shared the bento with him.[1] They eventually married and had their first son together. However, their relationship grew strained over time, and they divorced following Taka's conception.

Presently, the two do not get along at all. Hebihara's penchant for nagging annoys Shizuka. Likewise, her barbed retorts (once playful teasing), gets under his skin. Hebihara avoids contact with her and their sons as much as possible to minimize arguments. But for the sake of those sons (Taka in particular), Hebihara attends special occasions and acts civil towards her (as much as he can, anyway).[2]

Taizo was (and still is, depending on the circumstance) a stern father to Hayato, imparting lessons of being a responsible man. As his chemistry teacher, Taizo is even stricter due to professionalism. He specifically told Hayato on his first day at the academy only to address him as his teacher, since all students had to be treated equally. Taizo doesn't hesitate to threaten to hold Hayato back whenever he forgets his homework.[3]

For all his strictness, Taizo tried hard to bond with Hayato during his son's youth. They enjoyed doing activities together, like making and eating shaved ice at home. [4] Taizo fondly remembers helping Hayato overcome his insecurities, and will poke fun at him whenever he hypocritically complains about how annoying Taka is.[5] At heart, Taizo is ultimately a proud and supportive father to Hayato. He even makes an effort to attend his son's baseball games, though he does so with discretion.[6]

Taizo was not known to have interactions of any kind with Taka before Ryuu came along. Ever since learning about how much fun and mischief he gets up to at the daycare and at home, Taizo became more involved. He kept his distance at first, instructing Hayato to be a more patient and responsible elder brother.[3] Taizo was forced to get acquainted with his younger son when he happened to come across him on a public bus. He would learn that Taka was alone because he was running away from home after his mother wouldn't buy him a toy he wanted. When Taka began to cry, Taizo was surprised at how loud the boy was, the complete opposite of Hayato at that age. He then made the observation that Taka took after Shizuka. Taka asked how he knew the name of his mother, to which the flustered Taizo claimed that it was because they worked at the same school, keeping Taka unaware of their relation. He brought Taka back home to his family after sternly telling him not to throw tantrums over trivial things. Though he claimed that Taka might be getting spoiled under Shizuka's care, Taizo himself is not above anonymously sending his son expensive toys as presents.[7]

Taizo maintains an awkward distance at most times, but ever since their meeting Taka wants to spend time with him at every opportunity.[4] Such innocent sincerity turns out to be difficult for Taizo to refuse, even if it means being around his estranged ex-wife.[2] 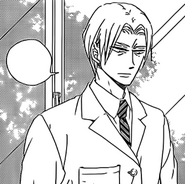