"No! I wanna stay at Kotarou's house t–"
―After being told he can't stay with Kotarou as well[1]

Taka Kamitani is one of the children at the Morinomiya Babysitting Club. He is the younger brother of Hayato and the son of Shizuka Kamitani—a science teacher at Morinomiya Academy's middle school.

Taka is a short boy with spiky dark black hair and a prominent widow's peak. He has round almond-shaped eyes and small dark irises, a trait he inherited from his father.

Taka is a loud and brash troublemaker who blurts out whatever is on his mind. This is a trait his father, Taizo, claims comes from Taka's mother Shizuka, depicting that she is often a very loud person when she would nag at him during their marriage. He often argues with his older brother Hayato, whom he secretly cares for and admires but complains about a lot especially when he is shown less attention. He frequently misbehaves and Hayato tends to hit Taka on the head as punishment in a running joke throughout the series.

Taka is a very talkative child and often comes up with his own games like "Ranger Five" to play with the other kids. At other times, he hits and pokes Usaida with his toy sword for his amusement.

He is close friends with Kotarou and proclaims to be his best friend. He is also friendly towards all the other children in the daycare, but mostly comes into conflict with Kirin who once refused to join his game of Ranger Five due to her studying to "become a witch" instead. He enjoys playing heroes and frequently cries when his brother hits him, calling him "Stupid Aniki" (informal for "older brother"). Like any other misbehaving child, he throws tantrums whenever things do not go his way, and throws himself on the floor face down when despondent.

Taka is the second born and youngest child of Shizuka and Taizo, both the middle school science teacher and high school chemistry teacher at Morinomiya Academy respectively. Unfortunately, his mother and father divorced causing his father to leave shortly before Taka was born, leaving Taka unaware of his father's true identity.

Taka is almost always seen arguing with his older brother, and many times Hayato hits him over the head to correct his behavior. The usual result is Taka bursting into tears, calling his older brother names, and often running to Ryuuichi, who proceeds to scold Hayato, either to his face or in his head.

Taka gets upset with his brother for many things, from something minor as ignoring him while practicing baseball to refusing to play with him during summer vacation. While Hayato's usual response is to hit Taka over the head when Taka does something wrong, Hayato completely ignores Taka when he drew "poo" on his treasured baseball as a measure of retaliation. Ryuuichi and Shizuka are worried when this happens, as it means that Hayato was angrier at Taka than usual.

Despite their usual disputes, Taka shares a deep admiration and love for his older brother. Evidence of this can be found when Usaida declares that even without a father, Taka still has his older brother (something that none of the other children in the daycare room except for Kotaro have). Taka comes to realization that even if he didn't have a father, he couldn't live without his older brother Hayato.[2]

Shizuka raises Taka in a different manner than she does Hayato. For one, she rarely hits him, with the only known exception being when she saw him being rude to girls.[3] Usually, she only gets forceful enough to hold him in place, cover his mouth when he yells, or pinch his face. Taka often throws tantrums when his mother doesn't let him have something he wants, which does little to change her mind.[4]

Taka's family keeps him in the dark regarding the identity of his father. Taka was briefly saddened over the fact that he didn't know.[2]

By chance, Taka did eventually meet his father, though he still doesn't realize it. It was on Children's Day, when Taka took a bus to run as far away from home as possible. Hebihara happened to be take the same bus and rode it until they both got off at the last stop. Hebihara convinced Taka to explain why he wasn't with his mother and brother, which led to Taka crying over not getting the toy he wanted. Hebihara told him that guys don't cry, which Taka realized sounded like something Hayato would say. After giving a wordy lecture that went completely over Taka's head, Hebihara used his phone to call Shizuka and inform her of the situation (and so Taka could apologize for his actions).[4]

Ever since Hebihara helped him return home, Taka saw the man as a good friend. Not even Hebihara's menacing glare discouraged Taka from wanting him to spend all day playing with him in the nursery.[5]

The first time Kotaro was introduced to the other daycare children, Taka elected him to be the monster in their hero game. But over the course of those early moments when Kotaro sat by the bookshelf all alone, a more sympathetic Taka led the other children to officially welcome him into their group by asking if he wanted to read a book together. Since then, Taka has considered himself to be Kotaro's best friend. He grows incredibly jealous when the other children approach Kotaro without him, and often tries to pry him away to keep him all to himself. Taka still has moments when he's inconsiderate towards Kotaro, such as when he teased him for never having seen a real tiger.

While Kotaro does not appear to play favorites amongst the other children, he enjoys the time he spends with Taka as well, content to let him take charge on their activities most of the time. This isn't to say Kotaro doesn't have a will of his own. Taka usually shies away from new people or experiences, and tries to hold Kotaro close whenever something unfamiliar appears. But Kotaro will break away in order to take a closer look. 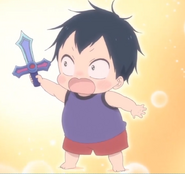