Tomoaki Maeno (Japanese)
Usaida Yoshihito is a graduate from Morinomiya Academy and he's currently working as a staff for the Morinomiya daycare center. He's the main person to care for Midori in the daycare and he's seen with her on his back often.

Usaida's a tall man with shoulder-length light pink hair which's usually parted in the center and pulled into a short ponytail. He has dark, half-lidded eyes, which make him look he's sleepy. It isn't that he's seen with his hair out, the only instances including when he is at his apartment or sick with a fever.

He usually wears an apron and a long-sleeved top, and he wears a small ring in each of his ears (in the manga). He's usually seen either sleeping, or with a crooked grin on his face.

While seen as lazy for sleeping all the time, Usaida's helpful and he cares greatly for the kids, even when rushing down to the daycare from home when he was sick with fever, because he was afraid Midori was in some sort of trouble.[1] The kids in the daycare room appear to trust him well, and play with him affectionately, even though Kirin called him "bad" with no redeeming qualities when she asked for his good points.

He appears to be very observant and calm in any situation, sensing Ryuuichi's feelings easily and providing him timely advice and help. For instance, when Taka asked about his dad by the rest of the kids, he helped an anxious Ryuuichi who wasn't able to handle the situation by pointing out to Taka that, "not all families are alike", and that Taka still has his brother with him.

He can be very blunt though, and he complains about his meagre pay and openly calling the chairwoman, "a cheapskate", or commenting on the naivety of the kids often. Also, he's shown to be cunning and intelligent in getting favors from others like luring Inui in with a fishing rod and a photo of Yukari to make him keep watch over Kotaro.

Nevertheless, he's very genuine about his relationships and he feels a strong sense of attachment to those he cares about, be it the daycare kids or Morinomiya sensei. Though Morinomiya sensei had already passed away, he kept the book he wrote about teaching with him.

Though Usaida spends most of his time in the daycare relaxing or sleeping, he leads quite an active personal life and he has several hobbies. One of his most frequently utilized skills is making costumes from scratch, for both the children and students. The paper bag mask Inui wears when he was anonymously helping Kotaro was of Usaida's design.[2]

Usaida's dad was an elite businessman who expected much of him while he was growing up, thus, he studied very hard. Eventually, his father went bankrupt and decided to become a farmer, telling Usaida to live his life the way he chose to. Suddenly adrift, Usaida had nothing to do and spent an entire year aimless and sleeping every day.

Following that, the chairwoman's son, Morinomiya Youichi, scouted him for a job working at the daycare, even making him go along with the pregnant Yukari to parenting classes in place of her husband, who was away on another dig. It can be interpreted that Usaida may have one point being attracted to Yukari due to her youthful and beautiful appearance. Then Usaida felt indebted to the kindness of Morinomiya Youichi, who advised him to also "find his dream" while working at the daycare room and studying for his childcare license. To date, Usaida is secretive about his family and does not reveal it to others.

One day, Yukari who was on her way to pick Midori up, suspected that Usaida might have a girlfriend due to him being sleepier than usual. Then she dragged a surprised Ryuuichi and Kotaro along to spy on him as she's also curious about "the type that he likes". Ryuuichi followed as he is also worried about Usaida's health and him having "narcolepsy". Eventually, they spotted Usaida entering a shop and in close contact with an unknown woman. They tailed them back to an apartment, presumably her house, and both Yukari and Ryuuichi are shocked that he might be having an affair with a married woman after encountering the fierce, bald man who lived in there. After several misunderstandings, it was revealed that Usaida was actually tutoring him as he wanted to be a better husband and father to his unborn child. Afterwards, Ryuuichi apologized for his rudeness of tailing him, but Usaida thanked and revealed his past family circumstances. Ryuuichi asked if he had found his dream, to which Usaida replies as "a secret".

Going against his father was tiring, but Usaida studied hard enough to maintain satisfactory results. When his father suddenly tells him that he should live the way he wants to, Usaida is stunned and even feels betrayed. At that moment, he felt isolated from his father, who was acting in an unfamiliar way. He had always thought that his father was someone who only cared about wealth and fame. It was at that time when Usaida felt that he had nothing to do.[3] Usaida's father provides free sprouts for Usaida's vegetable garden, and Usaida notes that they get along unexpectedly well.[4] 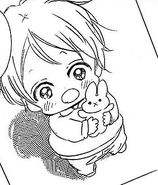 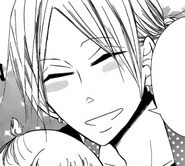 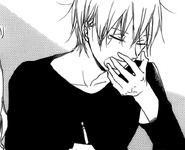 Retrieved from "https://gakuenbabysitters.fandom.com/wiki/Usaida_Yoshihito?oldid=10378"
Community content is available under CC-BY-SA unless otherwise noted.