Hondo Kaede
Ushimaru Yuki is a student in Ryuuichi and Hayato Kamitani's class at Morinomiya Academy with a crush on Ryuuichi.

Yuki is a teenage girl below average height with a brown bob hairstyle. She is seen by the male classmates as a cute and endearing person.

Yuki is a popular girl and tends to draw the attention of the male students because of her cute looks and gentle personality.

While she is kind-hearted and soft-spoken, she is also painfully shy and often gets embarrassed when interacting with her crush, Ryuuichi. She often gets confused and uneasy when dealing with small children.

Ushimaru develops a crush on Ryuuichi, having seen his dedication towards taking care of his brother, Kotarou. However, Ryuuichi is seen as viewing her only as a normal girl contrary to the other male students in class. Her infatuation with Ryuuichi leads her to be acquainted with Maria Inomata who also shares the same feelings. Despite this, they hold no contempt for each other as outright rivals, and eventually go on to become close friends. Ushimaru teaches Inomata on social skills and the importance of forming a bond with her classmates.

Due to her negative experiences with children flipping her skirt or generally harassing her in the past, she initially has a phobia of interacting with the daycare children. With Inomata's prodding and persuasion, she agrees to try befriending the daycare children and is well-received by Kirin and the rest of them. She finds Kotarou to be well-behaved and surprisingly "cute" after walking with him for awhile, attributing it to his similarities with his brother whom she likes. However, things took a wrong turn as she overthinks the situation while Taka accidentally tugs on her skirt to wipe Kotaro's nose and Kirin gives her an innocent gift of bugs. She faints out of shock. Nevertheless, the children show up at the infirmary with wild flowers to apologize afterwards and she learns that their playfulness are in fact a way of getting to know her.

Ushimaru and inomata would not have likely become friends were it not for a mutual infatuation with Ryuuichi. When she heard from her friends that Inomata had recently become close with Ryuuichi, Yuki became concerned that there was a rival for the affections of her crush.[1]

The two would not interact much until a love letter to Ryuuichi that neither of them wrote emerged. They both went to school early in order to see if he would reciprocate the sender's feelings. They ran into each other, then met Ryuuichi himself as he was trying to find where Kotarou wandered off to. After Kotarou was found, Yuki and Maria spied on Ryuuichi from behind a bush as he turned down the girl who wrote the letter. Despite still being romantic rivals, Yuki wished to become friends with Inomata. Thus, she began addressing her as Maria-chan in the hopes that they could slowly warm up to each other.[2]

It is very likely Yuki fell in love with Ryuuichi at first sight. She is best known for completely losing her composure when Ryuu is so much as brought up in conversation. She tries to spend time with understanding friends in order to keep from being overwhelmed by her feelings, an idea proposed by her friend Rena.

Yuki is always trying to get closer to Ryuu in an effort to get comfortable in his presence. Ryuu's responsibilities as a member of the Babysitter Club once complicated this mission, given Yuki's lifelong fear of being around children. When she accidentally blurted out this fear near Ryuu, he did not hold it against her, and he and Maria both tried to help her overcome this fear. Thanks to them she's making progress feeling at ease around the daycare children. Though Yuki knows that Ryuu is unlikely to pursue romance any time soon, she can't help but feel deeper feelings for him the more she learns about him. 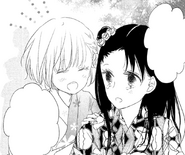 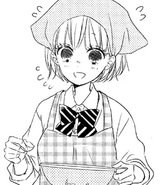 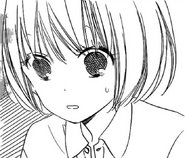 One of Yuki's first appearances in the manga (Chapter 34)