Toshiyuki Someya (Japanese)
Yagi Tomoya is a second-year student at the Morinomiya Academy in the Advanced Class with Maria Inomata and Nezu Chuukichi with whom he is best friends with since elementary school.

Yagi is slender with straight, light brown hair and dark grey eyes. He is good-looking according to the girls at the academy and is generally seen smiling. He also has nosebleeds whenever he sees the children in the daycare room.

He is good in his studies and soft-spoken with everyone he associates with, especially his best friend, Nezu, and the children in the daycare room. He is extremely fond of children and often reacts with comical nosebleeds which lead to misunderstandings. He is also thoughtful, sometimes buying gifts for the daycare kids.

He is also extremely popular with girls, with a crowd of them around him at the lost-and-found booth of a matsuri festival once which made Hayato comment if it was a "host club" he was managing.

Yagi is the younger child of two. He has an older sister, Kotone and parents who are never seen. Yagi spent a lonely childhood. His overall cheerful demeanor hides the fact that his parents' frequent work-related absences and his sister's busyness make him very much alone all the time.

On one lonely occasion, Yagi's parents missed his birthday which made him cry really hard. Upon seeing that, Nezu invited him over to his house to celebrate his birthday with his large family. Nezu's mother comforted him, and he started crying again. This in turn made the infant Nezu twins, Suekichi and Kichi, cry too. Nezu promptly encourages Yagi to stop doing so to prevent his brothers from crying. He agreed and this brought smiles on the twins faces which made Yagi fall in love with babies. This lifted his spirits and he was able to experience what a loving home felt like.

When Ryuuichi and Kotaro was picking up a sad Kirin from her home in the morning as her mother was unable to do so herself, he encounters Yagi and the twin brothers, Kichi and Suekichi. Fearing that Yagi as a "pervert" will harass Kotaro, the twins ran away with Kotaro to "save the baby", leaving behind a nonplussed Ryuuichi. Then, Ryuuichi leaves Kirin in the arms of Yagi to chase after them. Yagi confessed to Kirin after awhile that he felt lonely as a child and was glad to be able to play with them in the daycare room. He laughed at his own words, claiming them as a joke, but Kirin saw that as an honest side of Yagi and invited the "sparkly onii-chan" to come play with them as often as he likes. Later on, Yagi brought a lot of his chocolate to share with the daycare children and said that it was coincidentally his birthday as well. The children drew a "ticket to visit them anytime" which was presented by Kirin to him, which made him very happy inside.

Tomoya is affectionate towards his often beleaguered older sister. He is understanding of her desire to help people in her line of work as best she can. When she fails to do so, he'll console her by reminding her she did the best she could.

Out of respect for Kotone and their parents, Tomoya does not share with his family how lonely he tends to get at home while the rest of his family works, especially around his birthday. Still, Kotone cares enough that when she overheard him talking about it, she tried to bake him a birthday cake and get their parents home early to celebrate. Though her baking skills were lacking and their parents could only attend via teleconference, Tomoya was immensely grateful for the effort.[1]

Chuukichi had been Yagi's closest friend ever since childhood. Yagi was always awed by Chuukichi's determination to become the best at everything he did for the sake of his family. Though Yagi's obsession with Chuukichi's cute younger siblings was all too apparent, Yagi does earnestly try to maintain a normal friendship with him, and often invites him to spend quality time with one another.

Chuukichi has never had a kind word to say to him, and threatens to report his behavior to the police more often than not. Despite this, the feeling of friendship is indeed mutual, and he does accept Yagi's invitations when he has free time.

Tomoya in the anime

Tomoya in the manga 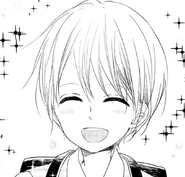 Tomoya as a child

Tomoya as a baby